Two and a half days of work, the 7 judges discovered, explored, touched the different materials, read and enjoyed discovering all these original stories illustrated with sought after materials. The group wrote the following synthesis: 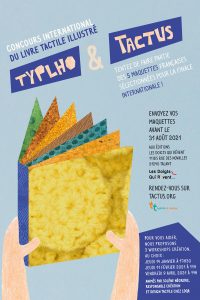 All countries combined, the 18 participant countries received together 405 entries, with a record of 231 for Italy; each Typhlo & Tactus national partner received an average of 10 entries and selected an average of 4 for the international jury which received 61. The national selections took place at 37% in August, at 21% in September and at 16% in June.
At 81%, the 85 authors were women with an average age of 40, for who at 53% it was the first Tactile illustrated Book and who at 32% were participating in T&T for the first time. These authors were 16% of students of different disciplines, 13.8% of teachers, 10% from visually impaired backgrounds and 9% art.

The discovery and reading of each entry demonstrate a work of reflection, originality and great creativity. This year new topics were covered such as feelings, emotions, and jobs. Several entries evoke ecology, for example the seabed. Some authors also apprehend concepts such as light or paintings by painters… In addition, we are also seeing new sizes (formats): more big books and more game books. All these entries introduce either new materials or original techniques and interesting tactile surprises. 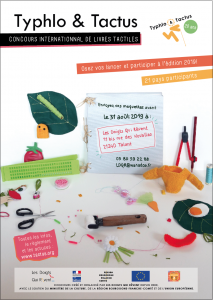 For this 2017 competition, the jury noted that the quality of the books has improved a lot:

It is important that T&T continues to shine in the world. What a reward to hear a blind mother who had just read a tactile illustrated book to her sighted child, tell us: “This is the first time that I can read a book to my child” or this blind 6-year-old girl who, at the end of the day, reading a tactile illustrated book, takes my hands, puts them on her face and says “Touch my smile”.

In Italy a national project “A Spasso con le Dita” [Walk at your fingertips] born in 2010 from the collaboration between the National Federation for the Blind Olnus and ENEL Cuore Olnus to promote tactile publishing for children throughout the country. This project enabled, between 2010 and 2012, the creation and distribution for free of 5,000 tactile illustrated books in public libraries, pediatric hospitals and cultural institutions.

From 2013, an itinerant exhibition of tactile illustrated books has traveled all over Italy (Rome, Venice, Genoa, Bologna, etc.). In addition to the presentation of the books, didactic and fun workshops allowed the general public and children to discover the potential of multisensory illustration. Professional illustrators and artists have accepted the difficult challenge of making illustrations accessible to touch. National and local media have widely reported on the particularity and richness of this traveling exhibition.

Let us take inspiration from this Italian experience to promote the richness of the tactile picture in all blind and sighted children. Some experiences have shown its positive impact also on:

Defend the idea of Philippe CLAUDET (founder and director of Les Doigts Qui Rêvent, and founder of T&T); a tactile illustrated book for blind child is an essential cultural prosthesis. The deaf child benefits from hearing aids which will allow him to access information and culture; disabled people receive a wheelchair, an essential prosthesis to promote their independence when they can no longer walk.

Despite these difficulties Typhlo & Tactus is increasingly recognized and is becoming an international reference.

This year 2013, the Typhlo & Tactus competition took place in Finland. This country has provided significant resources in material and intellectual support for children’s and youth’s literature and its writers. This investment has positive spinoffs. Studies show that young Finns are among the most advanced in the world in terms of reading skills and attendance. We hope that education and cultural leaders around the world will learn from the Finnish example and support initiatives in favor of literature suitable for young children with visual impairments.

In 2000 four countries: Belgium, France, United Kingdom and Italy took part in T&T, the first world’s tactile illustrated book competition. This year 23 countries signed up to T&T. This significant increase in participants proves that the objectives set during its creation, have been achieved. Unfortunately for lack of funding and a recognized administrative structure, the award-winning books are no longer produced. How to solve this paradox, namely on one hand the increase of the creation of tactile illustrated books and on the other hand the difficulty to set an international production. However, the T&T competition without production is of little interest to children with visual impairments (or concerned).

Typhlo & Tactus is recognized by:

For this T&T 2013 competition, the jury noted that from one end of the world to the other there were common themes:

Many of the models were made of fabric, often with real objects, which made the entries bulky. The stories deserve to be more original. In order to address the weaknesses noted this year, the T&T jury will give itself the means of reflection to stimulate national creations.

More and more tactile entries are arriving. This year around 350 entries were made for the Typhlo & Tactus competition, the record being held by Italy with 210 entries! To limit sending a maximum of 5 books to the international competition, each country made a national selection with sighted and blind people.

The jury noted an improvement in the quality of the entries, in the use of increasingly evocative materials and in the new themes addressed.

Some entries are still too big and too heavy for children and the tactile picture is still too often visual based. However, the jury noted improvements:

The stories are more and more interactive with elements to be moved thanks to Velcro®, objects hidden under a fabric, behind a “shutter” etc..

End of the 3 years of the Typhlo & Tactus project with European subsidy.

This year the jury saw an effort to make the entries interactive. Many items were made from sewn fabrics. The jury admired their beauty. However, their reproduction is difficult and would distort their tactile qualities. If the T&T project is renewed, we count on national members to advise and guide the authors of tactile illustrated books in order to enrich the quality of the texts.

For all members of the jury, the T&T competition is a highlight. This unique opportunity in the world, where ten countries come together around tactile illustrated books, exchange their techniques, mutually bring their knowledge, is essential and the T&T founding members want the T&T adventure to continue.

Can it stop now when T&T is starting to be known worldwide? As proof, Korean television came to report on the work of the T&T competition jury and Mr. John Tuck, responsible for the British collection of the National Library of England, honored us with his presence.

Following this edition, 1,144 copies of the three awards were produced in Dutch, English, Finnish, French, German, Italian and Polish.

This year, again, we see a weakness in the writing of the texts. On the other hand, the illustrations are a source of real research and several entries present original concepts.

For 7 years, an increasing number of entries have come to us, which shows a need for tactile illustrated books and also a cruel lack of these books on the European or even world market.

In addition to the interest aroused by this competition, the jury notes that the range of authors is widening: at the beginning the entries were produced by professionals and parents. Currently, fine arts students, illustrators and authors are presenting original works for the Typhlo & Tactus competition.

The reflection, led by the T&T founding members, is an important and indispensable action for young blind children. Indeed, they only have contact with children’s literature and Braille writing through these books. These must therefore exist and be of excellent quality.

Following this competition, 1,129 copies of the three awards were produced in Dutch, English, Finnish, French, German, Italian, Polish and Czech.

The members of the Jury noted that the graphic quality of the entries is clearly improving. This progress is due to the emulation generated by the TYPHLO & TACTUS competition. The first objective of the T&T Charter has been achieved this year.

There is a general opinion that the texts and content are often weak and lacking in originality. The texts are often enumerative and recurring themes are found for example the animal which is alone and which seeks a friend etc. It would be interesting that the T&T national partners spread the information released by the Jury:

Following this edition, 1,094 copies of the three awards were produced in Dutch, English, Finnish, French, German, Italian and Polish.

Following this edition, 1,155 copies of the three awards were produced in English, Finnish, French, German and Italian.

Following this edition, 1,340 copies of the three awards were produced in English, Finnish, French, German and Italian.

Following this edition, 630 copies of the two awards were produced in English, Finnish, French and Italian.

Following this edition, 570 copies of the 1st prize were produced in English, Finnish, French and Italian.

Following this edition, 609 copies of the 1st prize were produced in English, French and Italian.